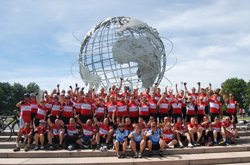 The ride connected the airline’s two regional hubs and provided employees from offices in the UK and the US an opportunity to bond as a team while also raising money for their partner charity, Free the Children. At the end of 2013, Virgin Atlantic Airways will present the funds raised in the event to this charity, which functions as a worldwide child advocacy group that works to reduce poverty and improve educational opportunities for children throughout the world.

The carefully mapped route took cyclists through diverse regions of Massachusetts, Rhode Island, Connecticut and New York, and included a ferry ride from New London, CT to Orient Point, NY, on the eastern tip of Long Island. Lunch and rest stops saw riders refueling at wildlife areas, urban parks, a colonial farmstead, a turkey farm for farm-fresh turkey sandwiches and a vineyard for a bit of wine tasting and brick oven pizza.

All participants successfully completed the team-building challenge by riding through Central Park as a red jersey-clad group to the finish at North Meadows where a cheering crowd of supporters and spectators greeted them. Riders were unanimous in their feeling that the trip brought the group together, strengthened bonds and increased incentive to reengage with both corporate and personal goals. The group gave high marks to the organization and execution of the event by Great Freedom Adventures as did Virgin Atlantic’s Aviation Security Manager Phil Williams, the contact person from the Virgin Atlantic side and organizer of the UK and US ride participants.

“Great Freedom Adventures safely led our team of riders…from Boston to New York. It was a great opportunity for us to bring different elements of the Virgin Family together on such an epic adventure. Your support team were all very competent, friendly, and accommodating. Leading a group of this size can never be easy, but your team accomplished it with ease, making the whole experience truly wonderful. From feedback already received from the group, I can tell that it has had a positive life-changing impact to many of those who participated. We look forward to partnering with Great Freedom Adventures again in the near future,” says Williams.

Intrepid Walkers and Cyclists Challenged by Great Freedom Adventures to Complete the Walk or Pedal For PSC to Fight... read more