Great Freedom Adventurers on the Maritime Bike and Beer Adventure Take a Cold Shower for ALS!

Sherborn, MA, August 28, 2014 – Bike tour guests on Great Freedom Adventures’ August Bike and Beer Adventure on the North Shore of Massachusetts may have been expecting a warm shower at the end of their ride. What they got instead was a self-inflicted ice water dousing. 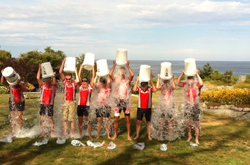 While enjoying the view at Singing Beach in Manchester-by-the-Sea, part way through day five of the tour, guests were challenged by the staff at Great Freedom Adventures to take the ALS Ice Bucket Challenge. Cyclists had 25 miles of pedaling to Rockport, on the tip of Cape Ann, during which to decide to accept the challenge or to donate to the ALS Association. Great Freedom Adventures sweetened the pot by pledging to make a donation to the association for each person who accepted the challenge.

At the end of the 25 miles, at the Emerson Inn-by-the-Sea in Rockport, the cyclists assembled on the lawn overlooking the ocean. The time had come to find out just who had both an adventuresome and an altruistic spirit. As it turned out, all members of the group established themselves as true Great Freedom Adventurers. “Every single person in the fun-loving group of bike tourists and beer aficionados accepted the ALS Ice Bucket Challenge,” says Jeanne Rummel, founder of Great Freedom Adventures.

After nominating unsuspecting new people, dumping ice in their buckets and tapping reserves of courage, the group poured ice water on themselves to gleeful shrieks and much laughter. The group celebrated the successful completion of the challenge by – what else – drinking a local craft beer.

To view the ALS IceBucket Challenge video go to: https://www.youtube.com/watch?v=BXgl8eO7iVY