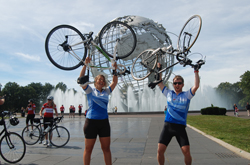 Sherborn, MA, April 29, 2014 – Bike tour operator, Great Freedom Adventures, announces Four States and Five Boroughs, an exciting six-day, 290 mile cycling adventure from Boston to New York, timed to arrive in New York City in time to join 32,000 cyclists from around the world for the famed Five Boro Bike Tour. New York’s Five Boro Bike Tour, occurring annually on the first Sunday of May, is America’s largest cycling event and to get to it, Great Freedom Adventurers will depart Boston and pedal 250 miles through four states over four days.

The 40-mile Five Boro Bike Tour is a rolling festival through all five boroughs of New York City on traffic-free streets. Riders bike through Central Park, past skyscrapers, by urban neighborhoods, and over five bridges, including the spectacular Verrazano-Narrows Bridge. The tour finishes with a festival on Staten Island in New York Harbor.

Another stop is the newly named “National Treasure” in Flushing Meadows-Corona Park, Queens, NY. The National Trust for Historic Preservation recently awarded this distinction to the park’s New York State Pavilion, the former site of two World’s Fairs. Towering over the pavilion’s fountains and reflecting pools is the 12-story high Unisphere, a globe of the world built to represent the theme of the 1964-1965 World’s Fair – “Peace through Understanding.”

Further highlights of the tour include a crossing of Long Island Sound by boat, cycling through landscapes of vineyards and farmland and ride rewarding visits to a winery, and a brewery. Riders pedal unencumbered with full van support, guides and luggage transport.

Guests on Great Freedom Adventures’ Four States and Five Boroughs Boston to New York bike tour stay overnight in vibrant, coastal towns offering opportunities to explore the Northeast’s maritime heritage along with contemporary hot spots. In addition, participants can explore the East coast’s premier cities while spending a night in Boston and one in New York, with options to extend the stay before and after the tour.

The Four States and Five Boroughs tour begins at the end of April each year and finishes on the first Sunday in May in order to coincide with the Five Boro Bike Tour. Custom Boston to New York bike tour departure dates, to exclude the Five Boro Bike Tour, can be arranged. For more information and the full daily program, please see: Bike Boston to New York – Four States and Five Boroughs.