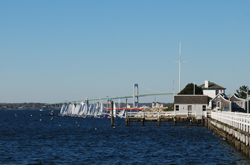 Sherborn, MA, January 7, 2014 – Bike tour operator, Great Freedom Adventures announces two new 2014 US bike tours that will include music festival revelry in the itinerary. Guests on the July 27 departure of a new four-day Rhode Island tour will attend the famed Newport Folk Festival, while guests on a new summer departure of the six-day Hudson Valley New York tour will experience the Hudson Music Fest on August 8th and 9th.

The new four-day Rhode Island By Land and By Sea Bike Tour offers two departures in 2014, June 29 and July 27, the latter including an evening at the Newport Folk Festival. Founded in 1959, the event, an annual American folk-oriented music festival, is one of the major folk festivals in the United States. The festival is known for introducing performers, such as Joan Baez and Bob Dylan, who went on to become major stars. The festival features performances by folk, blues, country, bluegrass and folk rock musicians as well as related contemporary genres such as alternative country, indie folk and folk punk.

Guests on Great Freedom Adventures’ By Land and By Sea Rhode Island Bike Tour will spend the late afternoon and early evening of the first day at Newport’s Fort Adams, enjoying the music and the setting. The outdoor festival is set on a scenic peninsula stretching into Newport Harbor. Fort walls rise from grass lawns in a prime music venue encircled by hundreds of boats rocking in the blue waters with the silver Newport bridge beyond.

In addition to the festival, participants on the Rhode Island tour will spend a day biking on Block Island, a place the Nature Conservancy termed “one of the last great places,” with stops at Mohegan Bluffs, Great Salt Pond and the island’s two lighthouses. Another day is spent on tranquil Conanicut Island with routes offering views of impressive “summer cottages”, salt-water farms and one of the country’s oldest lighthouses. On Aquidneck Island, guests will view Newport’s Gilded Age mansions, walk the oceanside Cliff Walk and bike renowned Ocean Ave.

The tour is priced at $1,650 per person double occupancy and includes lodging at a fine historic inn in the heart of Newport’s Old Quarter, most meals,two round-trip ferry passages, a lantern-light walking tour of Newport, admission to the Breakers mansion (June 29 departure), admission to the Newport Folk Festival (July 27 departure), lighthouse tours, guided biking and walking on nature trails and Cliff Walk, bike rental, guides, maps and cue sheets, van support, daily snacks and cold drinks, and transport to and from the Providence airport or train station.

The By Land and By Sea tour cycling distances range from 8-29 miles per day with options for longer routes for those who wish. The tour is appropriate for all abilities with van support and the ability to ride at your own pace.

Guests on the August 8th departure will experience two days of the fourth annual Hudson Music Fest, a three-day celebration of music during which musicians of all genres play day and night throughout the town – in the parks, at the riverfront, on the sidewalks, in the restaurants, galleries, bars and nightclubs. “With over 100 acts performing at more than a dozen venues, we are New York State’s largest three-day music festival,” said Chad Weckler, co-organizer of the festival. Hudson, a hip and vibrant town known for visual and performing arts, antiques, architecture and world-class restaurants, is now also being touted as the next music mecca.

Cyclists ride between 15-38 miles per day with options for more mileage for avid cyclists. The trip is appropriate for all abilities with van support and the ability to ride at your own pace.